The Magic of Mentoring

Have you ever received a gift that changed your life? I have. On Christmas day 1968 when my grandparents gave me an Adams Magic Set. On that day I ripped open the large, mysterious package and began practicing a craft that has changed how I see the world, created great joy, helped change lives, and produced income. Chances are I would never have been blessed by that gift if it weren’t for the magic of mentoring.

Many children, between the age of 7 and 12 are given a magic set. Most rummage through the assortment of plastic props, trick cards, and other oddities and then set the box aside, never to return to it. Magic tricks aren’t toys that are immediately gratifying. Yet in that box lies great value that goes unclaimed by most.

So why did I stick with it to reap the benefits of that magical gift? I had some great mentors, starting with my grandfather.

First, my grandfather got down on the floor with me, took the instruction booklet and reviewed the rules of magic. These are foundational rules like, “Always practice a trick until you have mastered it. Never perform a trick before you can do it well.” And, “Never divulge a secret.” These rules set me up for success.

Yes, Send Me the Guide

No thanks, our culture is perfect.

We took one trick, read the instructions, and practiced until I could produce the desired effect. I continued to practice all day in front of a mirror until I could perform the trick with ease. 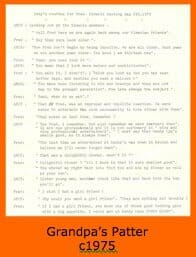 Then, at dinner I would perform each new trick for my grandparents. The next morning at the breakfast table Grandpa would leave an envelope for me with a script for the trick, called the magician’s “patter”. After reading the patter I moved beyond practicing the technique of the trick to rehearsing the entire presentation. Technique plus patter produced something beyond a “trick.” It created an entertaining experience.

We lived in a very small town (Beulah, Michigan, pop. 421) where Grandpa was the president of the bank. He would brag about me at work and people would invite me to perform at events.

In other words, he was a mentor who shaped how I approached the world of magic…and life. This is what good mentors do.

In my case my mentor began by helping me understand expectations, requirements and rules – essentially giving me the structure to enhance my chances of being successful.

All of this involvement by my mentor made me feel valued, and therein lies the true essence of mentoring.

According to a survey by the American Psychological Association (APA), feeling valued is a key indicator of job performance.  Employees who feel valued are more likely to be engaged in their work and feel satisfied and motivated. The survey indicates that half of all employees who say that they do not feel valued at work report that they intend to look for a new job in the next year. Imagine the cost of turnover, lack of engagement, and lost potential caused by not feeling valued. Conversely, imagine the tremendous return on investment of retaining good people, inspiring engagement, and tapping into dormant potential. This is the ROI of mentoring.

Clearly, powerful mentoring takes time, which continues to be a precious commodity for us all. But the time invested can make a difference in someone’s life that is truly magical. This gift of caring can be life-changing and magnify the success of your company exponentially.